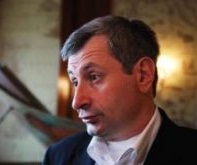 TBILISI, DFWatch–Georgia’s Finance Ministry’s investigative service launched an investigation into the organization of the former member of parliament and well-known climber Gia Tortladze.

Investigators believe that money given by the Culture Ministry to the Deoccupation Center was embezzled.

The investigation was launched January 23, 2013, and according to the case file, USD 21 000 was transferred to Georgia’s Deoccupation Center from the Culture Ministry on September 5, 2012. The money was to be spent on a project called Georgia without Occupants. As part of this project, the center was also given a Toyota Land Cruiser Prado, valued at USD 62 000.

Although provided freely for its use, the center was prohibited by law from selling the car, as it was state property. Still, Gia Tortladze sold the car for USD 50 000 on January 4, 2013, according to the case brief made public, and spent the money on himself.

Tortladze may now face from 7 to 11 years in jail.

The former member of parliament told journalists that the whole case is nothing but a ploy by Prime Minister Bidzina Ivanishvili.

He challenges the notion that his center was prohibited from selling the car and says the car belonged to his organization following a decree which says that the culture minister gave it to the organization for free.

“This was our property and when our center was applied to have debt for spending money for Himalaya, we sold the car and paid the debt. It’s a made up story,” he says adding that he criticized Bidzina Ivanishvili a lot and this is a political game.

Tortladze also notes he can document how he has spent the money.

“We filmed two documentaries and presented both. We have made a webpage, issued leaflets and organized presentation of the films. Not a cent was embezzled.”

May 19, 2012, Tortladze climbed Mount Everest with a Georgian flag, an expedition that took a month and a half. The main message of his expedition was ‘Georgia without Occupants.’