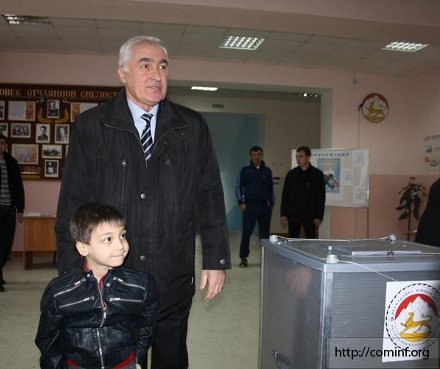 Leonid Tibilov, a former local KGB chief, unexpectedly beat the Kremlin favorite in the rescheduled South Ossetian election, and will be facing a former human rights commissioner in the second round April 8. (Photo: RES.)

TBILISI, DFWatch – Leonid Tibilov, a former head of the KGB in Georgia’s breakaway region South Ossetia beat the other three candidates in the president elections Sunday.

In the region’s previous attempt to select a leader, an opposition candidate won against the Kremlin favorite. That election was cancelled. This time, all four candidates were palatable to Moscow.

But there still lay surprises in waiting for Russia, which has placed the region under military occupation since the 2008 war.

Medoyev finished third, after Tibilov and presidential human rights commissioner David Sanakoyev, and won’t be going through to the second round.

Like in November, none of the candidates won an outright victory in the first round, moving the process to a second round. This means that people in the Tskhinvali region will have to vote for de facto president for a fourth time in five months.

An opposition news website in South Ossetia writes that it was obvious that the authorities had a hard discussion about whom to put as a second candidate in the second round. They can’t select Medoyev, the Kremlin favorite, since he finished third.

“A candidate from the government (local and Moscow) was considered Dmitry Medoyev; and Vadim Brovtsev, acting president of South Ossetia, worked hard for his victory.”

In the first election, which were held in November 2011, the opposition leader Alla Dzhioyeva and Kremlin favorite Anatoly Bibilov went through to the second round, with Dzhioyeva ending up clearly beating her opponent.

In an interview with Kommersant online fourth candidate Stanislav Kochiyev, Communist Party leader says that if Moscow has influence over elections in South Ossetia, then it is much unnoticed.

Journalist and the respondent agree to the fact that so-called acting president supported Medoyev.

“And isn’t Brovtsev Moscow? There are several governmental centers in Moscow. Some are stronger, some –weaker, some very weak and everyone tries to present themselves that he is Moscow.”

Looking for reasons of the latest events, the Ossetian website writes that in recent years people are against any government.

“This is the result of failures with reconstruction, and the terrible condition which the city of Tskhinvali is in, it can be called a social and humanitarian catastrophe.”

The former de facto president of South Ossetia was also unpopular. Kokoity was at the top in 2008, during the Russian-Georgian war in August. He later in 2011 resigned on the grounds of agreement with the opposition leader Alla Dzhioyeva holding permanent protests demanding to democratically transfer powers to her as she won the elections.

“I most recently joined the race, but despite a modest budget and lack of administrative resources, we were able to pass the second round. This is our victory, the victory of the Ossetian people,” Sanakoyev told Ria Novosti. He received around 24% of the votes.

“Of course we wanted to win the first round. However, understanding the balance of power, we are prepared for two rounds. What is the outcome of such words, we will continue to work. I am certainly confident of victory in the second vote,” Tibilov says. He received around 42% of the votes in the elections.

The second round is scheduled for April 8.

The results of the second round of first election in the region were annulled by the so-called Supreme Court of South Ossetia. This led to a protest campaign by of Dzhioyeva’s supporters. Her attempts to defend her rights and become de facto president have so far been unsuccessful; but she has not given up.

The opposition leader was going to hold her inauguration on February 10; but the day before, she and her supporters were attacked and she ended up in hospital for more than month. A few days ago, she returned home and according to Ossetian media, her house is protected by guards.

Dzhioyeva did not vote on Sunday, but called on her supporters to vote.