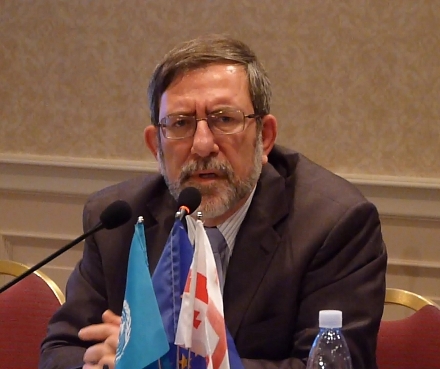 TBILISI, DFWatch – A legislative initiative to provide for more diverse media in Georgia continues to gather support as the EU Ambassador says he supports it.

At a meeting at the Central Election Commission today, EU Ambassador to Georgia Philip Dimitrov said it gives him hope that the principles of must-carry and must-offer will see the light of day during the election period.

The law will force cable companies to let all broadcasters be included in their packages. It will also force TV channels to let their signal be carried by all cable companies.

Dimitrov thinks this will be a very important step towards preparing voters for the upcoming elections.

It’s been several months since the media and non-governmental organizations asked parliament to introduce the must-carry and must-offer principles. The ruling party, which controls an absolute majority in parliament, has refused to do this until recent days, when the Speaker of Parliament Davit Bakradze signaled that his party is in favor, but only as a temporary measure during the election period.

Spokespersons for the ruling National Movement party argues that because the country has a liberal policy, it is not right to interfere in the activities of private broadcaster and cable companies. But the Speaker now says it is important to inform voters as best as possible before the elections, and therefore it is possible to make an exception.

Currently, there are three national TV channels that have news, and all are strongly pro-government. Most of the distributor companies that provide TV coverage around the country are government controlled. Independent and opposition TV channels are being denied distribution and can only broadcast in Tbilisi and through the Internet. Furthermore, the national channels refuse to let their signals be carried by the one cable operator which is affiliated with the opposition.

As a result, the population, especially the part of it that lives outside of cities, doesn’t have access to the full spectrum of TV channels, which is a significant democracy problem, considering the fact that TV still is the main source of information for most people.

The new regulation is expected to be passed by parliament today.