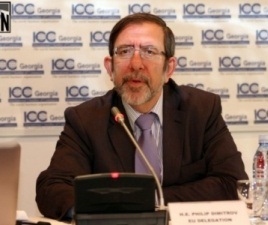 The Commission writes this in a new report about the implementation of the European Neighborhood Policy in Georgia.

Even though there was a democratic transfer of power after the parliamentary election in October, 2012, there are problems in the justice system and in the media, according to the report.

On the positive side, a democratic election was held, there were positive steps in freedom of speech, and Georgia has renewed its commitment to engagement with the breakaway regions Abkhazia and South Ossetia.

But the report also notes that Georgia continued to implement its strategy for engagement without ‘reviewing restrictive aspects of the law on occupied territories.’

“Following the change of government, there are some encouraging signs of possibly more effective engagement with the breakaway territories, and a more relaxed implementation of the Law on Occupied Territories,” the report reads.

The report also criticizes a recent mass amnesty, which saw the release of more than 8 000 prisoners.

“This process suffered from a number of flaws: the parliament did not involve the judiciary, which might normally have been entrusted with the role of establishing whether the individuals concerned were political prisoners according to objective criteria and international norms,” it says, also noting that lawmakers didn’t consult the Venice Commission before passing the law.

“The Venice Commission’s opinion states that the amnesty law failed to comply with certain fundamental principles of the rule of law, namely legality (including transparency), the prohibition of arbitrariness, non-discrimination and equality before the law.”

Thursday, the Georgian government said in a statement that it welcomes the fact that the new report underlines progress achieved within the frames of the European neighborhood policy.

“As a result of progress on reforms for deep democracy and respect for human rights, Georgia benefited from an additional allocation of EUR 22 million under the Eastern Partnership Integration and Cooperation Programme in 2012,” the statement says, quoting the Commission report.

The recommendations for Georgia’s government are the following:

Address shortcomings in the electoral law as identified by the OSCE Office for Democratic Institutions and Human Rights (ODIHR).ahead of the 2013 Presidential election and 2014 local elections.

• Ensure respect for the roles of the Prime Minister and President under the constitution; ensure that constitutional amendments, if contemplated, are subject to comprehensive 1 A decrease of over 15% from December 2011 to December 2012. 2 The Action Plan should be replaced by the Association Agenda in the course of 2013. 4 consultation domestically and with the Council of Europe’s Venice Commission to ensure that they stand the test of time.

• Reform the justice system to ensure the full independence of the judiciary, bringing criminal justice policies and practices into line with Council of Europe standards; revise rules on administrative detention in compliance with fair trial norms; and take the recommendations of the Public Defender’s Office into account in policy-making.

• Ensure that criminal prosecutions are conducted in a transparent and impartial manner, free of political motivation, in order to avoid any perception of selective justice.

• Increase the accountability and democratic oversight of law enforcement agencies.

• Conduct a thorough, transparent, independent investigation into the use of torture and ill treatment in the penitentiary system; implement structural reforms to prevent future abuse; ensure effective internal and external monitoring of the penitentiary system for the early detection and prevention of abuse and ill-treatment.

• Enhance Georgia’s engagement policy towards the breakaway regions and improve reconciliation/conflict resolution by finding ways to cooperate with the de facto authorities providing financial resources for engagement; take pragmatic and constructive steps (less focused on form and more on content) to encourage trade, travel and investment across the administrative boundary line; review the law on occupied territories.

• Continue to strengthen media pluralism and independence, and the freedom of expression and opinion; implement the law on transparency of media ownership; formally extend the duration of the ‘must-carry/must-offer’ principle.

• Continue and intensify dialogue and partnership with the International Labour Organisation (ILO), and build on specific co-operation with the ILO, the business community and trade unions in preparing amendments to the labour code, leading to improvements in labour rights and enhanced social dialogue.

• Adopt comprehensive anti-discrimination legislation; ensure that the rights of minorities, including religious minorities, are respected.

• Continue to advance sectoral reforms and ensure good quality approximation to the EU ‘acquis communitaire’ in order to pave the way for finalisation of the Association Agreement, including the DCFTA.