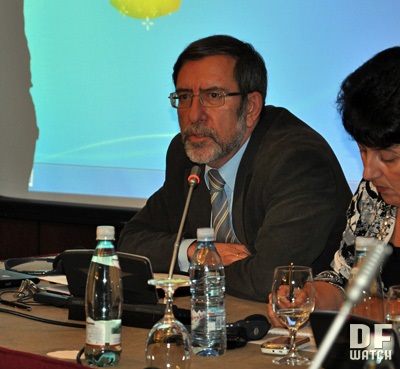 TBILISI, DFWatch – The EU ambassador to Georgia on Saturday evaluated the election period in the country and once again remarked that it is important that participants recognize the election results if international organizations do so.

Philip Dimitrov on Saturday attended a conference organized by a collection of Tbilisi-based NGOs, called National Platform, on the parliamentary election and Georgia’s prospects of EU integration. Minister for Euro and Euro-Atlantic integration, representatives of media, local and international organizations attended the meeting.

Dimitrov remarked that these elections are extremely important for Georgia and there is a lot that country has to defend in the way of negotiations with EU on association agreement, negotiations on a deep and comprehensive free trade agreement and visa rules.

“There have been a number of statements about polarization in Georgia, which is something we cannot regard as a positive trend,” he said, adding it’s a problem and might be dangerous.

“This is why in their statement they often — and commissioner Füle have clearly pointed out – that they expect that the elections in Georgia will be free and fair, close to European standards as possible and that there will be a considerable forward movement, in other words improvement of standards applied during the electoral campaign and the elections.”

He reminded that both EU Commissioner Füle and Catherine Ashton underlined that it is important that every participant in the election should have maturity enough to accept the results that are recognized by international observers which have years of experience and which are impartial.

“You have a long term mission of ODIHR which is more than many countries have managed to enjoy, so be happy with this,” Philip Dimitrov noted.

But he also said that if there will be any dramatic abuse of the rules by any of parties it will result in damage.

“There is a reluctance to accept the results if they are pronounced as a result of fair and free election, which will never be said in these words, but if it is seen that there is a progress you may have these elections have been recognized as acceptable.”

Otherwise he added ‘Georgia will be in the streets.’

The EU ambassador explained that if something goes wrong nobody will start an investigation. This will be up to  Georgia and the Georgian people to do, and the loser will be Georgian people.

Recently many are talking about the so-called code of conduct, which local non-government organizations proposed for political parties to sign. It sets out rules for conduct during the election period and after, such as avoiding violence. But later, the government added one point to the declaration: that political parties must accept the election result whether they win or lose.

Recently, Radio Liberty reported that EU Commissioner Füle had been asked for a meeting by Georgian Dream leader Bidzina Ivanishvili, and that Füle set as condition that he signed the code of conduct.

Later, Georgian Dream said Radio Liberty’s report was wrong, as Ivanishvili had never asked for a meeting, and the businessman himself said he has agreed to sign the code of conduct, albeit in the original version without any mention of recognizing the election result.

But Sunday evening Ivanishvili said on a talk show at the public broadcaster’s Channel 1 that if authoritative organizations recognizes the election result than the coalition will recognize it aswell.