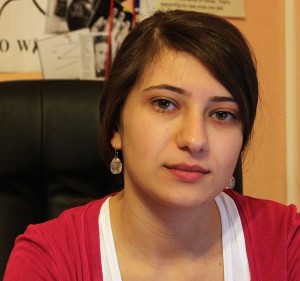 Nino Jomarjidze is a lawyer at Georgian Young Lawyer's Association.

During and after the Russo-Georgia conflict in August 2008, there have been a lot of human rights violations committed by both parties in the conflict, such as unlawful and disproportionate use of force by the military, unlawful detention of persons, inhuman treatment, disappearances and other violations, writes Nino Jomarjidze, lawyer at Georgian Young Lawyer’s Association.

During and after the active hostilities approximately 50 persons have disappeared on both sides. Some of the disappeared persons appeared to be dead, or their whereabouts became known later, while others are still missing. Georgian Young Lawyer’s Association (GYLA) in partnership with the Russian Justice Initiative (RJI) protects the legal interests of one ethnic Georgian and four South Ossetians who disappeared in the hands of Georgian or Russian/de facto South Ossetian authorities and has submitted several applications to the European Court of Human Rights that concerns their unlawful and unacknowledged detention, the subsequent disappearance and deprivation of life of these persons and other rights under the European Convention of Human Rights.

Family members of the disappeared persons applied to the investigative agencies of Georgia and the Russian Federation, seeking investigation into the cases of missing relatives during and after the August war. According to information provided by the authorities of Georgia and Russia, national investigations into the crimes committed during the war are ongoing, but by now there are no signs of progress or considerable efforts for the purpose of ensuring effective investigation on part of either of the conflict sides despite the fact that more than three years have passed since the August war. Furthermore, it should be noted that the investigation process differs on both sides of the conflict.

As for Georgia, according to different sources, several men have disappeared in the hand of Georgian authorities. On 8th of August 2008, Georgian military officials arrested an ethnic Ossetian in the village of Bakatikau (Kareli district). Relatives of this person have not seen him since 8 August 2008. The other case concerns disappearance of three ethnic Ossetians who went missing two months after the August 2008 armed conflict, close to the administrative boundary line (ABL). These persons are considered disappeared till present.

Though a preliminary investigation was launched and investigative activities were carried out by Georgian authorities into the disappearance of the ethnic Ossetians, serious shortcomings exist in the investigation process. During the investigative process a number of crucial investigative steps have never been taken and very little activity took place to thoroughly investigate the case. Some of the witnesses have not been questioned at all or have been taken with a great delay. The Georgian authorities have failed to undertake investigation activities, for example, they have not obtained or investigated some of the evidence that may have a decisive importance for the purpose of ensuring effective investigation. Beside this, in the cases of disappearance independence and impartiality of investigation is doubtful. Monitoring of Investigations into cases of missing persons during and after the August 2008 armed conflict in Georgia, Council of Europe Commissioner for Human Rights, reported that ‘”there was hardly any attempt to safeguard the independence of the investigation” despite the fact that Georgian legal framework ensures accountability and the principle of independence. Three years have passed since the date of the disappearance of ethnic Ossetians, however, the investigation is clueless as to the whereabouts of the missing persons and no perpetrators of that crime have been yet identified.

The Russian Federation and Georgia are obligated to undertake all measures available for effective investigation and prosecution of crimes committed in the August 2008 war, notwithstanding which side crimes were committed on. The Russian side should start investigation into the disappearance case of ethnic Georgian during the August war and the investigation should be capable of leading to the identification and punishment of persons responsible for any illegal acts. As for Georgia, its authorities should take all necessary steps to ensure that the investigation is fully independent and impartial. The investigation should examine the conduct of Georgian law enforcement officials, as well as any other Georgian officials, who were either witnesses or had a responsibility or a role at any stage in information collection or the investigation related to the disappearance of the missing persons. Furthermore, both parties to the conflict should keep public informed on developments in and consequences of the investigation.