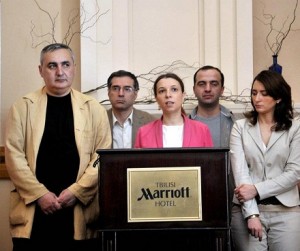 Democracy campaigners hope for U.S. Secretary of State Hillary Clinton's support for enforcing the 'must-carry' and 'must-offer' principles in Georgia. They believe breaking the TV monopoly of the Saakashvili regime is the most important step towards a fair election environment. (ISFED photo.)

TBILISI, DFWatch – Ahead of a visit to Georgia by U.S. Secretary of State Hillary Clinton, democracy campaigners are appealing to her for support in providing a fair election environment.

The campaign This Affects You Too was started in February 2012, after the Saakashvili regime enforced new restrictions and prohibitions for political parties as preparation for the parliamentary elections in October.

National broadcasters like Rustavi 2 and Imedi, which are considered pro-government, today refuse to let their signal be carried by the cable network Global TV, because this company is considered to be a supporter of Bidzina Ivanishvili, Saakashvili’s main competitor.

Maestro TV, which is not in favor of the government, is being denied by the cable company Silknet, which supports the government.

Pavle Kublashvili, head of parliament’s judicial committee, met with representatives of the This Affects You Too campaign to talk about this issue. The government says this principle is unacceptable to them because they ‘cannot force anything on private companies.’

But this principle is enforced in the U.S. and there is an EU directive for member countries to establish such a system.

Members of the campaign focus on an annual report published by the U.S. State Department, which says that there is no pluralistic environment in Georgia. Campaigners believe the most effective way to help bring about plurality is to introduce must-carry and must-offer in the legislation and they are awaiting the support of Secretary of State Hillary Clinton, who is to arrive in Georgia on June 5.