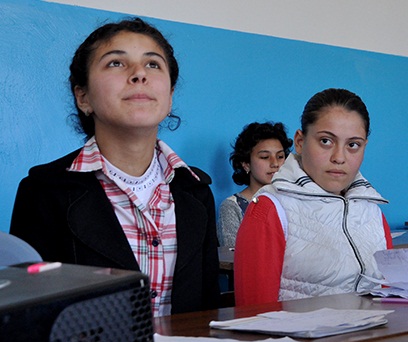 Few girls finish secondary school in Sagarejo, because they get married at a young age. (DF Watch.)

TBILISI, DFWatch–When a young man was murdered last weekend in Kazlar, an Azeri village 40km east of Tbilisi, it could have been one among many stories of violence and homicides in rural Georgia, but the circumstances of this case makes it stand out.

21 year old Ulpukar was killed because of a love affair with an underage girl. The murder took place as he allegedly was attempting to kidnap her.

According to an official statement by the Ministry of Internal Affairs (MIA), the victim was beaten to death with a stick after he tried to sneak into the perpetrator’s house and kidnap his underage daughter.

But the victim’s family tells a different story. According to victim’s uncle, the young couple had had feelings for each other for a year already, and on Saturday night Ulpukar received a message from his girlfriend saying that her father is away from home, so he ‘can come and take her’. The couple was already in the car when the girl’s father showed up. He smashed the car window with an ax, tied the man’s legs and arms together and dragged him inside the family house. According to the victim’s uncle, the whole family of the girl participated in the execution of Upulkar.

Director of the Tbilisi-based non-governmental organization ‘Women’s Information Center’ Maya Rusetskaya explained to DF Watch that forced marriages is still a prevalent social issue in rural regions. According to her, there is a drop in the number of bride kidnappings, however, young girls are still forced by their parents to get married. She said that some of the brides can be as young as thirteen; and sixteen in some communities is considered to be a standard age to get married.

Rusetskaya said that although forced marriages are more common in regions populated by ethnic minorities, especially Azeris, it can not be classified as something that occurs only amongst non-Georgians.

Commenting on this case, she said that it is hard to say what really happened, as eloping is also a popular option when a couple does not necessarily have their parents approval.

Researcher Andrea Peinhopf, a graduate of London School of Economics (LSE), wrote in a paper published in February 2014 that bride kidnapping, also known as marriage by abduction, was popular in the 1990s, but over time the number of such kidnappings fell, especially after it became a crime in 2004.

And in 2012, the Georgian government declared in its official statement to the Committee on the Elimination of Discrimination against Women (CEDAW) that “abduction of women for the purpose of marriage occurs very rarely, and such abductions are often arranged elopements.”

Nevertheless, Peinhopf argues that members of the Azeri community are still afraid of bride kidnapping and perceive it as a threat to the honor of the girl’s family, as the girl’s virginity is at stake.

She cites one male respondent, who explained that “the choice regarding his own daughters was not between marrying or not, but between getting abducted and not having any choice at all on the one hand and getting married at an age at which one would not want to marry under ideal circumstances.”

In other words, in some cases, early marriage can be considered the lesser of two evils, as a girl still has her say in an underage marriage, when in a case of bride kidnapping she most likely would be forced to marry her kidnapper.

But Peinhopf insists that such decisions sometimes are driven not by a genuine concern for a girl’s wellbeing, but a worry of family’s honor and reputation. “Once a girl is abducted, her virginity, and thereby her whole integrity, is put at stake. As a consequence, some girls  choose to stay in marriage with their kidnapper and his family in order to save her personal status as well as the status of her own family,” the researcher explains.

Thousands of girls drop out of school

At the same time, Peinhopf writes, early marriages are one of the biggest obstacles facing Azeri women. It prevents them from social, political and economic participation and is one of the main reasons for high levels of domestic violence.

In April 2014, DF Watch visited Duzagrama, another Azeri village in the Sagarejo district. Here local teachers complained that early marriages are one of the biggest problems in the village, as girls get married in 8th or 9th grade and never finish their secondary education. During the time of visit, there was only one girl in the 12th grade of a local school, and teachers explained that the rate of girls attending the school drops dramatically from the 9th grade. According to them, 13-14 year old girls sometimes are forced to marry their relatives or strangers from other parts of Georgia or even Baku. Families push their daughters to get married due to poverty, lack of education and nomadic life style, which prevents children from attending school regularly.

According to the Public Defender’s Office, from October 2011 to January 2013, 7,367 girls dropped out of school after receiving a basic education (7th-9th grade). The drop out rate is the highest in Kvemo Kartli, a region densely populated by ethnic Azeris. Although the reasons for these early drop outs are not specified, early marriage probably can account for a large part of them.

Young girls want to get married

In her paper, Peinhopf cites Leila Suleimanova, the chairwoman of the ‘Union of Azerbaijani Women of Georgia’, who stated that the number of early marriages in Georgia has been decreasing since the 1990s, except in the villages Algeti, Azizkendi, Sabirkendi, Kizil-Adjlo near Marneuli and in Nakhiduri and Kvemo Bolnisi near Bolnisi. In these villages it is still common for girls to marry at the age of fourteen or fifteen.

Suleimanova explained that sometimes young girls are themselves motivated to get married at an early age. For example, they are attracted by Azeri wedding traditions which make them feel like princesses during the period of the wedding ceremony, which may last weeks or even months. Another reason it appeals to them is social pressure for girls to be virgins on their wedding night, which means that curiosity about sex, caused by ‘TV and Internet’,  can lead to early marriage as well.

Peinhopf writes that in 2011, 659 girls and 39 boys under the age of 18 got married in Georgia. However, a lot of marriages among Muslim Azeris are conducted in mosques, and are therefore not included in official statistics.