Dances with a bear

Dances with a bear 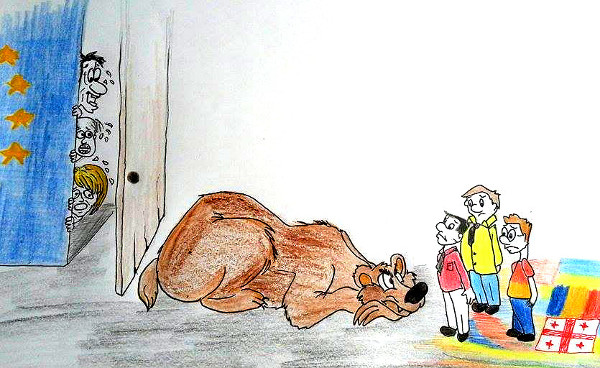 The lukewarm Eastern Partnership Summit in Riga further outlined the value of Georgia’s two most important interconnected strategic goals: transforming the country into a modern European state and its European perspective of joining the EU.

Roughly similar tasks are facing Ukraine and Moldova. Russian propaganda has been intensifying in recent times, and its top message is that the EU and NATO will never admit Georgia, and all political forces in the country, who overtly or covertly wish and hope this, are eager to repeat this message persistently.

Tactics of hybrid warfare utilized by Russia has been effective and it is quite possible that the number of Kremlin’s followers will gradually but significantly increase in the near future if people in the three nations see no positive signals from Brussels..

Partners recommend “strategic patience” on the road to European and Euro-Atlantic integration. But, without a clear strategic objective, such kind the patience makes no sense.

We of course realize the particular significance of the Association Agreement for the modernization of the country, and know what a potent momentum this document brings for Georgia’s political, social and economic reforms.

However, Georgia is constantly asking Brussels (as well as Berlin, Paris, etc.) to perceive Georgia’s European perspective rather in the light of the Article 49 of the Treaty on European Union, which states that the EU is open for membership to any European state which respects democratic values ​​and fundamental human rights, rather than see this within the framework of the Association Agreement.

Georgian society expected a clear signal from the Riga summit, but received completely vague response to its expectations, if any.

To put it in the gross geopolitical terms, Georgia, Ukraine and Moldova are still without a clear status, remaining a kind of a buffer zone. At the same time it is obvious that this kind of “obscurity” poses existential risk for them.

The bear is big and cruel, lying on the doorsteps and trying not to let Georgia, Ukraine and Moldova into Europe. Indeed, it even doesn’t allow them to knock on the door properly.

The bear’s future is unknown. Will it leave by itself? Will all of us make it go? Or, will the status quo be maintained indefinitely? The main question is whether we are in fact subject to Russia’s informal veto or will be allowed the choice of our own sovereign will.