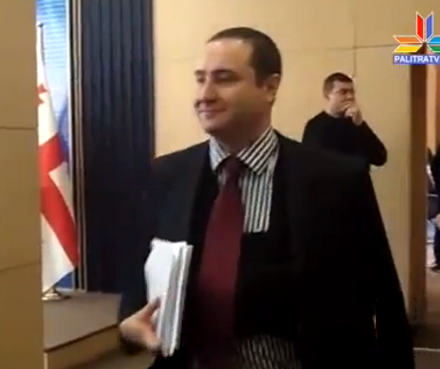 Minister for Diaspora Issues Kote Surguladze arrived with one hand in a cast. (Palitra TV.)

TBILISI, DFWatch–Four out of nineteen ministers appeared at the government session on Thursday with some kind of injury.

Journalists were surprised to see minister after minister arriving with a broken arm or a black eye.

Energy Minister Kakhi Kaladze, a former AC Milan player, appeared with a limp leg, which he said was due to trauma he received while snowboarding.

Agriculture Minister Davit Kirvalidze came with a walking stick, explaining that he was playing football when he broke a tendon.

The next one to arrive with an injury was Kote Surguladze, Minister for Diaspora Issues, who had his hand in a cast, but he didn’t explain the reason.

Last out was Refugee Minister Davit Dadakhvelidze, who at first tried to cover his black eye from the cameras, but later said he is undergoing a course of treatment for his eye.

The sight of so many injured ministers at once caught the media’s interest, as this was not the first time such a thing happened in the country. There were times during Saakashvili’s government when a few ministers, as well as the parliament speaker and the prime minister had health problems, and some reported that the cause of their injuries was that Saakashvili had beaten them.

In the beginning of 2009, Gela Mgaloblishvili, who was newly appointed Prime Minister, unexpectedly resigned and said the reason was his difficult health condition. Then, some media outlets reported that Saakashvili had beaten him during a quarrel.

At the same time, Speaker of Parliament Davit Bakradze was submitted to hospital. According to the official version, the reason was incorrect medical treatment which made it necessary to put him in the hospital. But unofficially it was reported that Saakashvili threw a cell phone at him.

Later, in 2011, there was another scandal around Economy Minister Vera Kobalia, and Natia Bandzeladze, chairman of the president’s press office. They both appeared to have health problems. One of them suddenly became ill and another one had brain concussion. Also, the minister for Euro-Atlantic integration Giorgi Baramidze had a leg problem.

Saakashvili was again accused of having caused his staff injury. Speculation this time circled around a pool party in Batumi after a concert by Sting.

The speculation was fueled by a cover-up of the minister’s injuries. Kobalia’s staff at the Economy Ministry claimed she was at work as usual. But the same day, a video taken from a hospital CCTV camera as well as an interview with hospital staff and published by Palitra confirmed that the minister was in fact submitted to a private clinic and not at work.