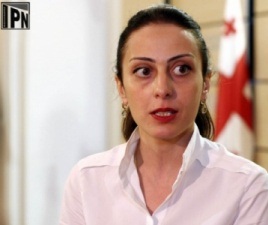 Khatia Dekanoidze, former head of police academy, is taking over the examinations center and brings with her staff from the police to fill positions of 60 employees that left in protest, citing political persecution of their boss. (IPN.)

TBILISI, DFWatch – After dismissing the head of the national examinations center, Georgia’s education minister has hired the head of the country’s police academy to fill her position.

The firing of Maya Miminoshvili has stirred emotions in Tbilisi, as many see her dismissal as politically motivated.

She has held the position as head of the examinations center since 2002, and has made a good impression both among the populace and her own employees. She is considered one of the key persons in carrying out successful reforms in the education sector after the rose revolution in 2003.

After she was fired, almost half of her staff resigned in protest. The education minister Dimitry Shashkin’s official reason for firing her was ‘incompatibility’ between them in how to conduct reforms, but there are suspicions that she was fired for the political activism of her son and brother.

About 60 of Miminoshvili’s staff has already left their jobs, but instead of leading to a crisis now that the country’s students are facing national tests, the education ministry simply brought in new employees from the police academy to fill the positions of those who left.

“Khatia Dekanoidze participated in successful reforms implemented in the country. This person will move education reform to a new stage. She is trusted among those working in the education system,” Dimitry Shashkin said.

The new head of the National Examinations Center promised that from the first day of her arrival and as soon as she has been introduced to the rest of her employees, they will start working on new reforms.

“Of course representatives of my team will be together with me, who will help me to introduce novelties.”

Dekanoidze claims she knows the education reforms and novelties well, and promises to have a more serious approach towards exams.

‘Mandaturi’ are police employees that have been deployed in the schools in Georgia.

She also promised that exams planned this summer will be conducted according to standards appropriate for the country.

Maya Miminoshvili and her colleagues who resigned also promised to do everything to assure that the upcoming exams are conducted in a responsible manner.

Meanwhile, Miminoshvili met with opposition leader Bidzina Ivanishvili to discuss what had happened, but she made it clear that she is not engaged in politics, neither is she planning to.

Yesterday, on Maestro TV she spoke about her time at the National Examinations Center. During the broadcast, she made serious accusations against education minister Dimitry Shashkin.

She said that Shashkin ordered 600 fake diplomas to be given away to ethnic minorities.

She remembered that several young people came to her last August complaining that they were denied to participate in the national exams. When they checked the system it emerged that they failed their final exams.

“When we told them that they failed final exams they presented certificates. Yes, we failed but we still were given the certificates,” Miminoshvili said.

When she spoke with Shahskin he was ready to answer.

“He said that this was politically necessary. He instructed me to tell my colleagues that those certificates were fake and that everybody should calm down.”

They didn’t report about this case, out of fear about being able to continue their work. But things worsened when two weeks later the minister called her and told her that they have given away certificates of a different series.

“This type of certificate doesn’t allow to study at Georgia’s higher universities, but can be used abroad. This is an international scandal, because those certificates are internationally recognized, and other countries recognize them. This means that I don’t recognize this certificate but, Sorbonne University in France does.”

Today minister denied the accusations, saying that everything was done within the frames of law.

“According to Georgia’s law on education, the education minister has a right to issue certificates with a certain serial number. This is written in the law and the law entitles the minister to this. I issued the order based on this law, on the grounds of which such certificates were given to 298 persons.”

Georgian citizens of Armenian and Azeri origins used such certificates to study at universities in Yerevan and Baku. In addition, fourteen young persons were allowed entrance to the world’s leading universities, he said.

He confirmed that those people had failed their exams.

The education ministry released a statement explaining that certificates were given to those 298 person, because the reason they failed was that they did not know the Georgian language well. Certificates were also tiven to fourteen especially talented Georgians.

The minister says it’s a pity that people report about ministers being criminals after they lose their positions.

“I am ready to hear in nearest future that I killed Kennedy, that I am Satan and people who are against Maya Miminoshvili’s policy are also servants of Satan and also if we find out that Alexander Kvitashvili (rector at Tbilisi State University) eats children and Ghia Murghulia also serves to Satan. That’s nature of human, which is very unfortunate.”