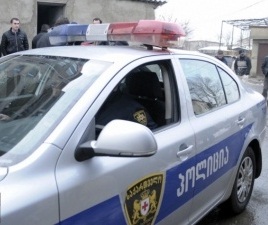 Criminals have taken advantage of a vacuum created by a restructuring of the interior ministry. Petty crime has doubled in the last month. (IPN.)

TBILISI, DFWatch — Georgia’s Interior Minister says he is not alarmed by a 50 percent increase in petty crime after the new government came to power, compared to previous months.

After the Georgian Dream coalition took over in early October, the National Movement party, which previously ran the country, has claimed that the new government is unable to keep the public order and that crime has increased.

For the first time, the new government has admitted that Georgia is experiencing a crime wave. Speaking on a talk show on Maestro TV on Wednesday, Irakli Gharibashvili revealed that in fact there has been a 50 percent increase in what is called hooliganism since he assumed office.

The interior minister explained that after the handover, there has been a certain ‘vacuum’ in the country, and that hooligans have exploited this for their own benefit. As a result, robberies and petty crimes have increased.

Some have claimed that four hundred interior ministry employees have been fired recently. Maestro’s talk show anchor said the TV station had been contacted by former employees of the interior ministry who said that one day when they came to work, there were lists on the wall with names of people who had been fired.

Responding to these claims, Gharibashvili denied this, and said they left voluntarily. He said some have been promoted, while some on the contrary, and that many decided to leave.

The minister promised that law enforcement will regain control in the next few days.

He said it is three weeks since his ministry’s departments were finished with a restructuring process, and that there has been achieved significant results in the last week in terms of preventing crime.

Criminal police and patrol police are now back in normal operation and have opened a number of old and new cases, including murder cases. In the near future, everything will get back to necessary conditions, the minister said.

Gharibashvili called on people with critical views and political opponents not to create panic and not to interrupt the ministry as it conducts necessary reforms.