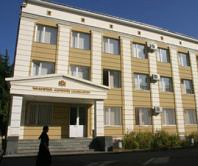 TBILISI, DFWatch–The regional Court in Sighnaghi in eastern Georgia is considering the case of a 25 year old man who married a 15 year old girl who is pregnant.

A few weeks ago, the couple showed up at a talk show on Imedi TV called the Gia Jajanidze Show. The man told of how he and the girl found each other as the girl accidentally called him and they started sending messages to each other.

The TV host asked him what he thought when he learned that the girl was 15. Nothing, he said; later revealing that he lied about his age in the beginning. He said it is even better that the girl is young.

The girl said that her family was furious in the beginning, but then they got used to it. She doesn’t currently attend school.

Members of the man’s  family now claim that the girl’s parents agreed to the marriage and that they didn’t know about the recently adopted law prohibiting marriage with a minor. Marrying a minor under 16 is punishable with 7 to 9 years in jail.