TBILISI, DFWatch–The Appeals Court in Georgia Friday upheld a decision to seize the property of former president Mikheil Saakashvili, along with the property of his spouse, sons, parents and grandmother.

To most Georgians, it has been unknown until today that there even was an appeals case about seizing the ex-president’s property, as although Tbilisi City Court decided this in late August, the decision wasn’t reported by the media until now, along with the Appeals Court’s ruling. 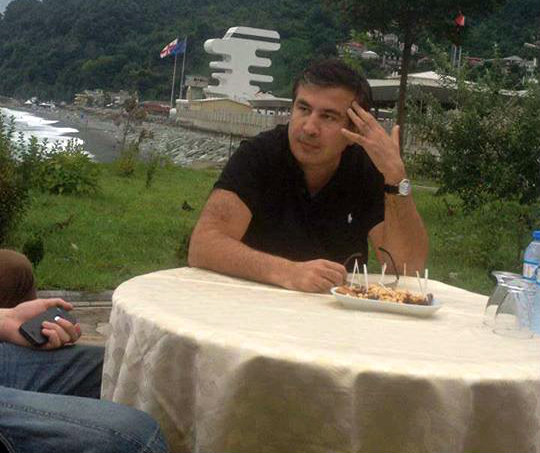 Saakashvili is charged with embezzling of up to 8.8 million lari (5 million USD) of public funds. Explaining the seizure, the Prosecutor’s Office wrote in a statement that since Saakashvili has been reluctant to cooperate with investigators, there was ‘a well-founded reason to believe’ that he might avoid financial responsibility by selling or otherwise hiding his own and his relatives’ properties.

The list of the seized property was made public by Oto Kakhidze, Saakashvili’s attorney. According to the lawyer, the court ordered to seize Saakashvili’s real estate in Kvareli, Kakheti, eastern Georgia, altogether an estate almost 2 hectars and a house of 75 square meters.

Also to be seized was a 500 square meter land plot in Ozurgeti, Guria, in western Georgia belonging to his grandmother, Mzia Tsereteli, together with a 10 year old Toyora RAV4 owned by the granny but used by Giuli Alasania, the ex-president’s mother.

Oto Kakhidze, Saakashvili’s attorney, said that the defence side only has one appeal option left in domestic courts, and that is to the Constitutional Court, and that his team is now weighing the possibility to appeal to the European Court of Human Rights in Strasbourg.

Apart from embezzlement, the charges against Saakashvili are that he exceeded his authority in the crackdown on opposition protests on November 7, 2007, and ordering a police raid and seizure of the TV channel Imedi, owned by late billionaire Badri Patarkatsishvili; and, ordering the beating of an opposition MP after the latter gave details of Saakashvili’s private life in a newspaper interview in 2005.

The court ordered to place Saakashvili in pre-trial detention in absentia because he left Georgia soon after leaving office in November 2013 and has not returned since.