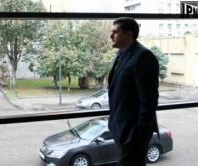 The accused former general Giorgi Kalandadze was let free without bail after the court heard a third round of charges. (IPN.)

TBILISI, DFWatch — Tbilisi City Court on Wednesday has released the accused former head of the General Headquarters from detention for a third time as he awaits trial for beating and harassing his subordinates.

The Prosecutor’s Office asked the court to detain the accused, Giorgi Kalandadze, but this time the court released him without bail.

At today’s hearing, prosecutors were unable to specify why there is risk that the accused may leave the country and interrupt the investigation.

Kalandadze’s lawyer suggested he be released on 3 000 lari bail, but Judge Merab Jorbenadze decided to release him without any bail. In two previous court appearances, the accused had to pay USD 6 000 and USD 12 000 respectively for his freedom until the start of the trial.

The last charge concerned the same case, as he was detained for the first time.

Giorgi Kalandadze was appointed to the position only a month before his detention November 7 together with former Interior Minister Bacho Akhalaia and Zurab Shamatava, former commander of fourth brigade. All of them are accused of abuse of powers.

A few days ago, Kalandadze was also charged for illegal deprivation of freedom in the same case as he and Bacho Akhalaia are involved in. https://dfwatch.net/military-top-handed-new-charges-98459

Family and friends of Kalandadze attended today’s hearing, including the wife of Bacho Akhalaia.

The court explained that the charges do not represent a new criminal case, but is the same case as the court has already made a decision about November 9, when he was let free against a USD 12 000 bail.

The trial is scheduled to start December 25 at Tbilisi City Court.