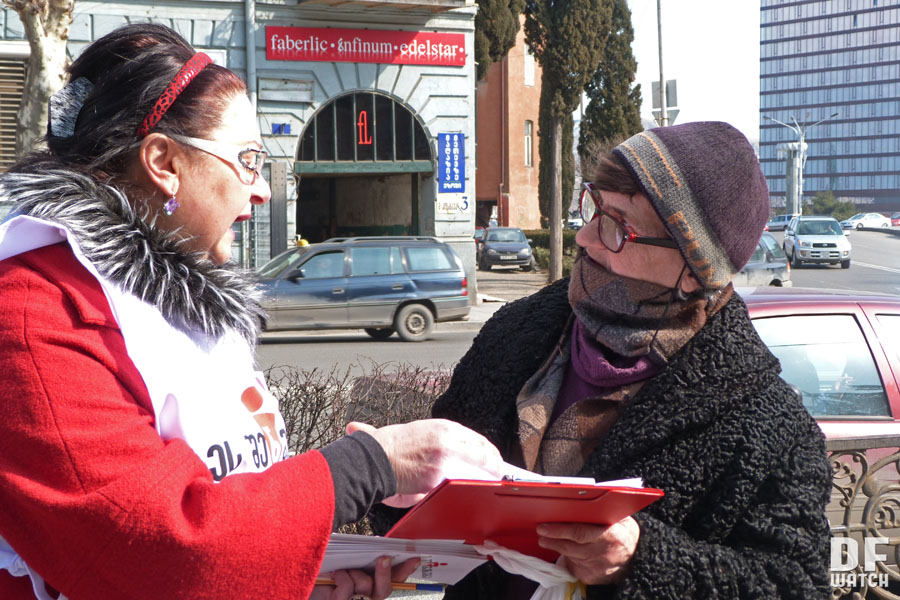 There were demonstrations in several towns around Georgia and at spots around the capital Tbilisi. New party financing restrictions are vaguely defined, and the groups want to be sure that Mikheil Saakashvili's party will not misuse the powers. Georgia holds parliamentary election this fall. (Photo: Mari Nikuradze.)

TBILISI, DFWatch – Groups in Georgia Thursday continued their campaign against the new party financing rules which were ushered in last December.

At different spots around Tbilisi and in several other towns there were demonstrations to highlight the threat posed by the law.

“Today we want to inform each citizen abut starting this campaign. We want to inform as many persons as possible, that the law may affect each of us and put a person in a very unjust situation,” she says, adding that the only demand is that the law is changed so that it is fair.

The ‘This Affects You Too’ campaign warns people that the restrictions applies to political parties may also be used against businesses, groups and even ordinary citizens.

Last week campaigners brought an alternative bill to parliament with recommendations for how they would like to see the law changed. A copy was also sent to foreign diplomats: the embassies of the United States, Switzerland, the Netherlands, Sweden, the United Kingdom, Germany, France, and others, as well as abroad to among others NATO, the European Commission, U.S. State Department, the European Council, the European Parliament, the OSCE, the United States republican and democratic institutions, the Venice Commission and other organizations.

“This is not a final rally, this is our first large scale out, and we will keep going on,” Khatiskatsi says.

The amendments to the law about political unions of citizens were, according to the government, aimed rooting out corruption and making the election environment more transparent.

The law restricts the financing of political parties, but at the same time applies these same restrictions to legal and individual persons that are directly or indirectly connected to a political party or a politician.

At the same time the law granted authority to the Georgian Chamber of Control to determine, without any evidence, that an organization or a person is connected to a political party, and apply sanctions.

The organizations have explained the problems they see in the law by way of examples. Restrictions may apply to a person if he or she has made political statement, or expressed support or disgust towards some politician or party.

If a person asked a political party or person for financial support, or just received financial help from them, they may be threatened with three years in jail.

It gets even worse, if a person from some organization made political comment or statement the whole organization is in danger of losing its financing.

“We are fed up with so much illegal actions and unjust policy by the government,” says Tsira, one of the people signing the petition today.

“They wanted to restrict Ivanishvili in giving away donations, but what have we done? And what were they thinking when they were receiving that huge financial support Ivanishvili provided to them?”

Another man today decided not to sign the petition at all, as he thinks nothing will change.

“I won’t sign. Don’t you see? While the current government is ruling you cannot change anything. Who did, which opposition won in the elections?”

But Tina, who also signed the petition, thinks that the NGOs and all the others are doing the right job.

“I didn’t even know anything about this law. I signed because our country doesn’t need another unjust law,” she says, and decides to stay at the event until the end, helping to hand out flyers.

391 have so far signed the petition online. The campaign is supported by Georgian Young Lawyers Association (GYLA), International Transparency Georgia (TI), International Society for Fair Elections and Democracy (ISFED), and other NGOs and media.