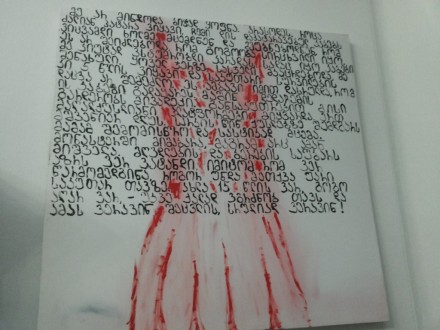 Poster from ‘Anonymous’ exhibition organised by Eteri Chkadua in collaboration with Identoba and Europe House as displayed in Identoba’s office. (DF Watch)

TBILISI, DFWatch–While transphobia remains a societal and legal issue in Georgia, NGO activists try to raise awareness of the problem and exercise pressure on the authorities.

As some in Georgia are still in shock over the ‘not guilty’ verdict in the case of the murder of transgender woman Sabi Beriani in late 2014, local activists for LGBTQ (lesbian, gay, bisexual, transgender, and queer) issues try to address transphobia in the country on the grassroots level.

The project ‘LBT Women’s Club’ was funded by NGO Women’s Fund and, as name suggests, focuses on sexual minority women’s issues and excludes gay men’s issues from its scope. The project aims at creating local activism groups within the inclusive framework of ‘gay-straight alliance’, i.e. members of the LGBTQ community working together with heterosexual activists, in order to combat homophobia and transphobia in Georgia.

‘One of the main issues faced by transgender people is lack of acceptance in the society and perpetuated physical and sociological violence’, LGBTQ activist and project leader Koba Bitsadze tells DFWatch. ‘The second type of issues is related to their legal rights such as lack of sex change legislation. The first step is for the state to recognise transgender people as a group. After this is done, it will be easier to discuss sex change procedures.’

Currently, in order to change the sex marker in official documents, the authorities ask for a legal confirmation of having gone through sex reassignment surgery, i.e. the surgery in which one’s external sexual characteristics are altered to resemble that of their identified sex. As such surgery isn’t performed in Georgia and is costly, there still hasn’t been a documented case of a transgender Georgian who has undergone the full transition, i.e. the permanent change of one’s gender presentation to accord with one’s internal sense of one’s gender — including the sex reassignment surgery.

‘I received signals from the some members of the transgender community that when they try to call emergency numbers, it’s always busy or no-one answers. They claim that their numbers were intentionally blocked, because the services don’t know how to handle reports coming from transgender people’, Koba continues. ‘Verbal violence on behalf of police officers isn’t unheard of either.’

Mainstream media productions such as Gia Jajanidze Show have been known to perpetuate transphobia by using members of the transgender community in sensationalist ways and as a source of comedy. Transgender people have become more weary of media visibility and ‘participating in the circus’, while no actual problems faced by their community are ever discussed in a balanced and sensitive way.

Currently, there are almost no Georgian-language resources on transgender issues available. One notable exception is report Situation of transgender people in Georgia was released earlier this year by NGO Women’s Initiatives Supporting Group.

With absence of state involvement, the issues faced by transgender community, including transphobia, have been left to the nongovernmental sector and grassroots activism.