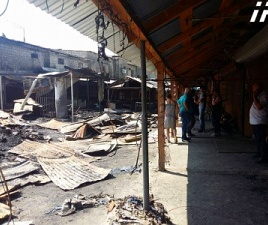 According to the Emergency Service, more than 1,000 square meters was destroyed by the fire in the center of the western Georgian town.

No one was injured.

The cause of the fire is unknown, but some claim that it was deliberately set off in a part of the bazaar.

Emergency crews from Kutaisi and Terjola helped put out the flames.

A local journalist working for Interpressnews reports that affected vendors gathered at the bazaar demanding compensation for their losses, which they claim will exceed 2 million laris.

Interpressnews also writes that Davit Khuskivadze, who owns one of properties burned down Tuesday night and the director of the bazaar Tsezar Maglakelidze accused each other of having started the fire. Locals say the two have been at odds for 17 years, a dispute which has involved court hearings and the prosecutor’s office but remains unresolved.