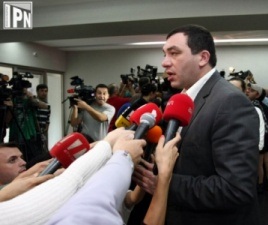 Bokeria is believed to have great influence in the government as well as an ideologue in Saakashvili’s government. The meeting was held at Ivanishvili’s business center, where he currently lives. It lasted more than an hour.

After the meeting, Bokeria said the president instructed him to visit Ivanishvili to speak about foreign policy issues.

“We will do anything to defend Georgia’s security and to have close relations with Georgian Dream in retaining our foreign policy direction,” he told journalists.

Even though Ivanishvili and his team has underlined that their goal is to stay the Western course, Saakashvili’s government still tries to accuse them of being pro-Russian.

“As the president number of times stated there are very serious and fundamental differences between us and those differences haven’t disappeared anywhere and probably won’t disappear in the future, as well,” Bokeria said.

“As for the country’s security and keeping safe from foreign threats, retaining our foreign political course, Euro-Atlantic integration course, we will do everything to have tied cooperation and will maximally support to protect the country’s interests.”

The Secretary of the Security Council said he welcomes Georgian Dream’s position to stay the course.

He reminded about Friday’s telephone calls the president and the prime minister candidate had with Anders Fogh Rasmussen, NATO’s Secretary General.

“The future prime minister made a statement after the election on this issue and made clear his own position. We salute this position about staying the course. Accordingly, as it should be in civilized countries, we are ready to continue this cooperation and our conversation was on these topics.”