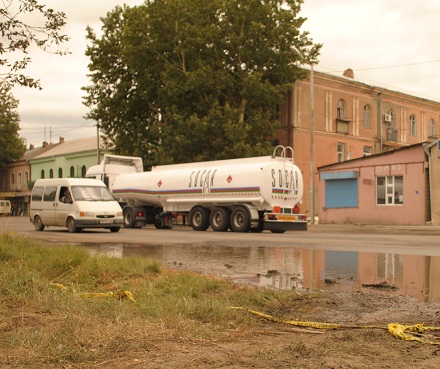 During the chlorine leak, a bus passed by. Most of those inside were poisoned. The tanker shown in this photo is not the one that leaked chlorine. (Photo: Londa Beria.)

TBILISI, DFWatch – A chlorine leak in Tbilisi yesterday evening poinsoned more than 80 people. One person is in a comatose condition.

The leak happened around nine in the evening at a private industrial area in the Lilo district on the southern edge of the capital. Emergency Service employees tried to move the chlorine tank to a safer location, when chlorine leaked for a second time.

Lasha Narimanidze (18) is in comatose condition. His heart stopped for more than five minutes yesterday, doctors say. His condition is critical.

Officials said 73 were hospitalised. About 30 still remain in hospital, including two pregnant women.

A man who was selling watermelons nearby tells DF Watch that he was at the place at 20:00 yesterday.

“My boss told me that chlorine was leaking a little bit and asked all of us watermelon sellers to leave,” he remembers, adding that after 10-15 minutes a team from the emergency service arrived and didn’t leave until 1 a.m.

He also remembers that people fainted in their cars. A bus was carrying people in front of the facility at the time. The majority of the passengers were poisoned, among them there were children and pregnant woman.

There is still smell of chlorine in this area, but it is not dangerous, according to emergency service representatives.

United Water Company of Georgia released statement which says that Kristali Ltd is responsible for what happened. In January 2012, the company announced a tender to purchase liquid chlorine, and Kristali won the tender.

The statement says that from February 8 until December 2012, Kristali should have supplied 50 tons of liquid chlorine step by step with appropriate containers.

“According to the contract Kristali Ltd carried responsibility for transportation, safety and quality of the chlorine.”

The police arrested Levan Datuashvili, head of Kristali. He has been questioned since morning together with other employees of the company. He may be punished with up to five years in jail.

An investigation is launched into the incident. According to media reports, locals are still calling the emergency service.