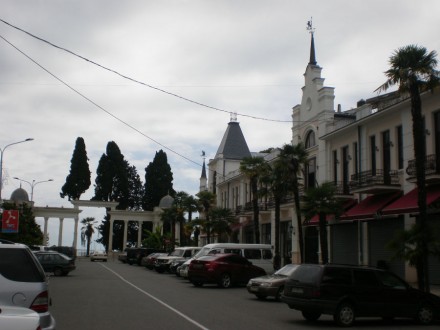 The postponement of the full implementation of the treaty on ‘Alliance and Strategic Partnership’, cabinet reshuffles, and demonstrations of opposition parties hint at Abkhazia’s increasingly knotty relation with Russia.

This year marks a series of substantial reshuffles in the breakaway Abkhazia’s government.

On 9 October, major-general Leonid Dzapshba was appointed the new minister of internal affairs, replacing Beslan Hagba. It was only reported that he left his post ‘at his own request’.

Then again, Beslan Hagba replaced yet another de facto minister Raul Lolua in May. Similarly, president Raul Hajymba didn’t present any substantial reasons for the shuffle except vaguely pointing out that ‘the change of leadership of the Ministry for Internal Affairs is a normal process’.

The tensions in the Ministry might be related to the controversy regarding the treaty on ‘Alliance and Strategic Partnership’ with Russia that has been heating up the Abkhazian political debate since at least early summer.

The treaty was ratified both by the Abkhazian parliament and the Russian State Duma in January. Under its provisions, a joint Abkhazian–Russian Information and Coordination Centre should be created. The Centre was envisioned as a mechanism for sharing information between Russia’s and Abkhazia’s Ministries of Internal Affairs and for establishing a joint command over Russian and Abkhazian military forces patrolling borders and territorial boundaries.

Tengyz Jopua, leader of recently established Ainar political party, published details of the project of the creation of the Centre on his Facebook page in June.

According to the project, the Russian involvement in the functioning of the Centre overshadows the role of local Abkhazian officials, effectively bringing Abkhazia’s domestic affairs under Russian control.

While the number of the employees of the Centre was originally envisioned at maximally 15 people, Raul Lolua stated after his resignation that one of the latest Russian proposals included increasing the number to 400, which would make it a powerful institution.

According to Izida Chania, editor-in-chief of Nuzhnaya newspaper, Vladislav Surkov, Vladimir Putin’s aide on Abkhazia and South Ossetia, conditioned continued Russian economic support on creation of the Centre during his meeting with prime minister Artur Amkwab in June, bringing blackmail into the realm of Abkhazian–Russian relations.

An anonymous government insider confirmed for DF Watch that there are strong pressures on behalf of Moscow towards creation of the Centre. The minister of internal affairs emerges as one of the central figures in the issue. Given the overwhelming parliamentary opposition, no-one wants to take responsibility for what is widely perceived as handing over Abkhazia’s independence to Russia — hence the constant cabinet shuffles.

All MPs expressed opposition to the creation of the Centre, except former minister of foreign affairs and former prime minister Sergei Shamba who brings up the argument that the Centre will be a contribution in combatting organised crime. He is also one of the campaigners for liberalisation of the property market, which would allow Russian citizens to purchase real estates in Abkhazia. The issue is hotly debated in Abkhazia with many observers pointing out that the liberalisation might further threat the republic’s independence.

The appointment of Leonid Dzapshba as the new minister of internal affairs coincides with opposition protests. According to Sputnik Apsny, more than three thousand people attended the extraordinary congress of the opposition party Amtsakhara (‘a battalion made up of members of one clan’) on 21 October. During the congress, president of Apra (‘Sail’) Foundation Aslan Bzhania voiced a demand for resignation of president Hajymba and early elections, while the resolution adopted by the congress describes the current government as ‘antinational’.

Amtsakhara together with party Aruaa (‘soldiers’) demonstrated in front of the Abkhazian parliament against the creation of the Information and Coordination Centre already in the beginning July.

At the same time on 21 October, up to four thousand people demonstrated in front of the Abkhazian State Drama Theatre in support of the president, calling for ‘national unity’ in order to overcome the current political low.

While it is difficult to make predictions regarding future developments on Abkhazian political scene, it is clear that the issues of Abkhazian–Russian relations, the degree of sovereignty of Abkhazian state institutions, the real estate market, and continued Russian funding are currently defining the debate in the republic.

The debate is also heavily shaped by nationalist narratives regarding relations with Georgia and Abkhazia’s ethnic Georgian population.

While Georgian politicians seem to quietly follow the situation in Abkhazia with interest, it is highly unlikely that Abkhazia will revert its policy of no-engagement with Tbilisi any time soon. What is more likely is that the deadlock will continue, sending small shockwaves across the region with consequences impossible to predict in the long run.

The article discusses developments as seen from Abkhazia and doesn’t reflect the view of DF Watch. The word ‘Abkhaz’ refers to an ethnicity, while ‘Abkhazian’ refers to an inhabitant of Abkhazia regardless their ethnic background or an institution based in Abkhazia. Abkhaz names are transliterated according to how they would be spelled in the Abkhaz language.