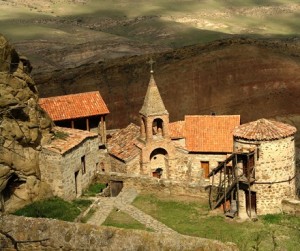 Soviet authorities drew the borders in such a way that the old David Gareja monastery ended up partly in Georgia and partly in Azerbaijan. On May 6, Azerbaijan placed border guards inside the monastery area, and started prevented Georgians from crossing the border. (Photo: Paata Vardanashvili.)

TBILISI, DFWatch – The Georgian government says it will solve the problems with the David Gareja monastery complex on the Georgia-Azerbaijan border.

The government raised the issue after witnesses reported that Georgian citizens and tourists aren’t allowed into a part of monastery complex currently under the control of Azerbaijan.

This is a new problem which, according to Georgian clerics, first arose on May 6 2012, when Azeri guards came into part of the monastery complex, specifically Udabno Monastery. They would not let in people who came there to pray. They also inform that, Azerbaijan claims Udabno Monastery is an Albanian cultural monument, referring to Caucasian Albania, a kingdom which existed from the 4th century BC to the 8th century AD and covered what today is Azerbaijan.

The David Gareja monastery complex is located about 60-70 km to the southeast from Georgia’s capital Tbilisi. It is an official Georgian religious and cultural monument, consisting of a number of churches. The complex was established in first half of of the sixth century. Since October 24 2011, it has been on the UNESCO World Heritage tentative list as a historical-cultural monument.

The Soviet government decided to draw the borders between union republics in such a way that part of the complex ended up being on Azerbaijani territory. After the collapse of the Soviet Union, there are many remaining issues before a final delineation can be agreed on, including this area of the border where Gareja is located.

Before, the government permanently claimed that process of border delineation is in progress with Azerbaijan and the issue of David Gareja is not yet decided.

But on Monday, deputy foreign minister Nino Kalandadze said at a briefing that ‘the Udabno Monastery section of David Gareja Monastery complex is not disputed territory and is considered as Azerbaijani territory since Soviet times.’

Her quote that this is not territory of dispute caused tension in public, after which government officials, including culture minister Nika Rurua; Goka Gabashvili, representative in parliament for the majority party, with responsibility for the culture sphere; and Mikheil Machavariani, Vice Speaker of Parliament, explained that the deputy foreign minister only meant that this territory is disputed and there are negotiations exactly on this issue.

On Wednesday, Kalandadze explained on her Facebook page that the media had misinterpreted what she said.

“But the facts are the following: delimitation process between Georgia and Azerbaijan on state border is still in progress. Commissions of delimitation between states have agreed on 66 percent of border yet. 2 percent of David Gareja monastery complex territory is among un-agreed area, including cells of Udabno Monastery and paths, which lead to it, because of very simple reason that the above mentioned 2 percent of Monastery complex territory got under control of Azerbaijan since Soviet Union times by administrative distribution. Accordingly, the rest of David Gareja Monastery complex is on the Georgian territory.” Her statement says.

In addition she also says that as a result of Georgian efforts, Azerbaijan has for years not been restricting free movement on this territory. About ten days ago, Azerbaijani border guards told Georgia that they would only let clerics and border guards into the territory of Udabno Monastery.

“Currently our efforts are directed at restoring free movement on the above mentioned territory,” she says, and adds that it has never been an issue in dealings between the two neighbors which side has a claim to David Gareja monastery complex.

“This is clearly a Georgian cultural monument.”

Kalandadze hopes that each person desiring to visit the place before border delimitation process ends, will be able to.

“It will be decided on the two countries’ traditional good-neighborly and friendly spirits.”

Despite her latest statement there is dissatisfaction among Georgian population and there are planned different civic activities and events.