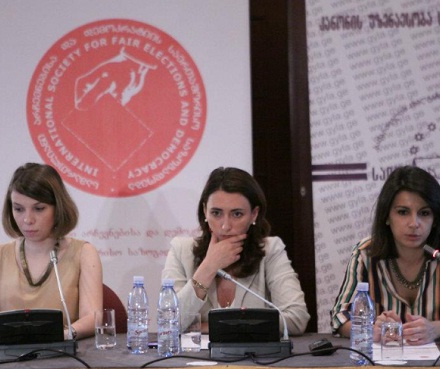 Nino Lomjaria (ISFED) (left), Eka Gigauri (TIG) and Tamar Chugoshvili (GYLA) (right), in a photo published by the NGOs after a press conference earlier this year.

TBILISI, DFWatch — After a series of videos were released September 19, documenting torture of prisoners, more than 40 activists were put in administrative detention, an old Soviet-style form of punishment.

The finding is part of in a new study by three non-governmental organizations, who write that during the wave of administrative detentions as a public scandal was raging and harming President Saakashvili’s chances before an election, people were sentenced without any proof. “Human rights were violated,” the groups conclude.

International Society for Fair Elections and Democracy (ISFED), Georgian Young Lawyers Association (GYLA) and Transparency International Georgia (TIG) Saturday presented the results, which are actually a study – their final one — of the election environment ahead of the parliamentary election on October 1.

Summing up all the violations committed in the last period, arrests on a political background were rare this year, but after a former prison guard released videos showing that prisoners in Georgia were as late as last year subjected to the most humiliating abuse by staff, the number of arrests significantly increased.

Another area of concern is people being fired for political reasons. There were 57 cases of political firing in both public and private sector, according to the study. Activists for various political parties have told of harassment and threats against them. The non-governmental organizations gathered over 50 cases of harassment because of political views.

Also subject to the groups’ scrutiny was unequal treatment of the opposition and the ruling party. Some fines against oppositional parties could paralyze their activities, while the violations of United National Movement were ignored, listeners at Saturday’s presentation learned.

ISFED, GYLA and TIG also looked at how the introduction of must-carry and must-offer has worked out. These are regulations that force cable networks to carry all TV stations, and on the other hand force TV stations to let their signal be carried by all cable networks, so as to prevent the political loyalty of certain broadcasters and distributors from eschewing people’s availability of channels.

The ruling party was originally opposed to introducing this measure, but changed its mind and decided to have it, but as a temporary arrangement until election day. The NGOs write that introducing these principles have had a positive effect.

The organizations think that a new strict system for taking photos and video at election precincts will obstruct journalists and have a negative effect on transparency of the election process.