Another TV channel taken over in Georgia

Another TV channel taken over in Georgia 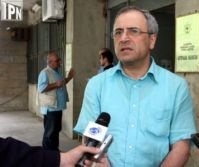 Davit Zilpimian says his TV station Pirveli Stereo was taken over because he agreed to technical cooperation with Channel 9, which is owned by the wife of opposition billionaire Bidzina Ivanishvili. (IPN.)

TBILISI, DFWatch – A small TV station in Georgia has been taken over, in the latest of a series of disputes within media in the country.

A few days ago, Davit Zilpimian reported that the property of Pirveli Stereo and Stereo Plus, a TV channel he established, had been seized, and accused parliamentarian Davit Bezhuashvili and the Justice Ministry of breaking the law.

Zilpimian told journalists at a press conference that the problems started when he re-registered Stereo Plus in the name of a citizen of Italy, and signed a contract with Channel 9 for technical services.

Channel 9 is the property of the wife of opposition billionaire Bidzina Ivanishvili, and has had its share of troubles, as have Maestro TV, another independent outlet. Journalists also report about violence, harassment and violations of their rights, while some television stations are blacklisted by cable networks.

Four months away from an important parliamentary election, Georgia’s population is still served by three national channels that are all strongly pro-government.

After Zilpimian re-registered the property, Davit Bezhuashvili, a former partner, filed a lawsuit against him, saying that Zilpimian financially hurt him and demanded that the property be seized.

According to Zilpimian, 65 percent of Pirveli Stereo belongs to MP’s wife’s brother, but in fact the owner is Bezhuashvili himself.

Zilpimian says Bezhuashvili’s statement was heard in court for a few minutes, and later on Saturday his property was seized, both Pirveli Stereo and Stereo Plus.

He added that Bezhuashvili has nothing to do with Stereo Plus, which was his and Italian partners’ property.

Zilpimian was fired on May 18, at a session of the partners of the TV company, held ten days earlier than scheduled. Of all partners, only the 65 percent holder of Pirveli Stereo attended the meeting and made the decision to fire Zilpimian and appoint himself to his position.

The former director considers this action illegal, as it is necessary for at least 67 percent owners to make a decision and Vasil Kobaidze owns only 65 percent.

The same day, employees of a security firm took control of the building, saying that they came on orders of the new director, Vasil Kobaidze. Zilpimian together with company employees were trying to prevent anyone from entering.

The next day, the former director wasn’t allowed in. Part of the employees were in the building, others remained outside, all supporting Zilpimian, who now says he is going to complain to the Prosecutor’s Office.

The new director said he will consider all options to bring the situation in order and handle relations with employees so that company is restored to normal activity.

A spokesperson for the new director says that everything happened within the frames of law. But Zilpimian disagrees. He says no partners were informed about the changes, but the registration files have already been changed in the Civil Registry.

Media.ge writes that Pirveli Stereo has about 40 employees. Some of them say they do not know Vasil Kobaidze and do not plan to continue cooperation with him.

Zilpimian sees these events in connection with an agreement signed with Channel 9. He says the intervention is done by corrupt, higher authorities. He promised to name all names of those who participated in these actions together with MP Davit Bezhuashvili.