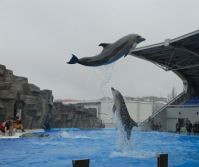 TBILISI, DFWatch–Six men broke into a dolphinarium in Batumi on Sunday, and demanded that the dolphins be set free.

The six activists were all detained and questioned.

According to Batumi Dolphinarium’s management, the group broke through a cordon to enter the restricted area. They went into a part of the facility that is used for interaction with the dolphins, using tear gas to bypass security, and interrupted the staff’s work.

There were visitors at the facility at a time of the incident, including children.

The Interior Ministry has launched an investigation pursuant to article 125 of the Criminal Code, about battery.

Interpressnews quotes the head of the Federation of Animal Protection, Temur Lachkebiani, saying that a few people protested that the animals are kept and got into a ‘physical confrontation’ with the guard and used tear gas in self-defense.

He said among the attackers were citizens of Belarus, Turkey, Russia and Iran.