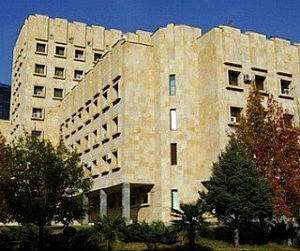 The demonstrators outside the Prosecutor’s Office were raising awareness about the case of Khanum Jeiranova (30), an ethnic Azeri woman who committed suicide last year after being subject to violence.

Jeiranova was from the village Iormughanlo, which is inhabited by mostly Azerbaijanis and lies close to the border with Azerbaijan. Local media reported last year that she , accused of cheating on her husband and taken outside by four men and beat in front of other people.

For months, her family and her husband have been requesting an investigation into the case. Her husband Aji Ghasanov shot one of the four attackers in the leg and surrendered to police.

The Prosecutor’s Office charged him with premeditated murder and the court sentenced him to seven years in jail, while the four remain free and not subject to any charges.

Prosecutors claim to be investigating the case, but after a year there haven’t been any detainees.

Human rights activists on Friday demanded the detention of the people responsible for bringing Jeiranova to the point of suicide.

The Prosecutor’s Office did not respond.