73 fired Telasi workers get their jobs back

73 fired Telasi workers get their jobs back 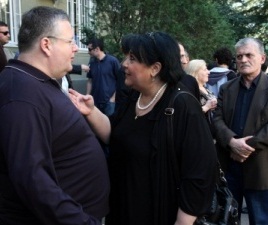 Workers at Telasi were among the first in a wave of strikes and labor protests in the wake of the October 1, 2012 election. (Interpressnews.)

TBILISI, DFWatch — The power company Telasi has brought back 73 out of 107 employees who were fired, according to the company’s director.

Workers at Telasi, which distributes electricity in Tbilisi, have been out in the streets for two months. They were among the first to go on strike after the October 1, 2012 parliamentary election to defend labor rights.

Friday Telasi director Devi Kandelaki broke the news that 73 former employees have been given their jobs back.

A special commission was set up at the Energy Ministry to study the problems at Telasi Company and review each case of people who have been fired.

But the process is not finished. Kandelaki says there is a meeting planned today with 15 other employees to continue reviewing such cases.

“We will do everything to timely solve the problems,” he said, adding that he is personally involved in the process. For the rest of the employees who have not been rehired there will be individual offers, taking into account their experience and qualifications.

The Telasi workers’ main demand was to fire the company’s commercial director, whom they blamed for having fired many employees and other problems. This demand was granted and a special commission was set up to individually study cases of firings.