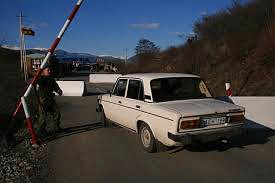 TBILISI, DFWatch–Every day, about 200 tons of agricultural products is brought from Georgia into the Akhalgori district of South Ossetia, Sputnik Ossetia reports.

Akhalgori is a part of the breakaway region which was under Georgian control until the war in 2008. Many people cross here on a daily basis, through the checkpoint at Mosabruni, or Razdæxæn in the Ossetian language.

But until now, the extent of this flow of people and goods has not been measured. This is because the border guards are not performing custom checks here, and neither tracking the number of people nor volume of goods.

But recently, the breakaway region’s Deputy Prime Minister Dmitry Kozaev instructed a representative of the Interior Ministry of the de facto republic in Akhalgori, or Leningor, district to find out why agricultural products from Georgia to South Ossetia are sold three to four times more expensive.

The border guards were instructed to carry out monitoring for a week and write their findings in a report.

The conclusion was that every day, about 700 people cross the Mosabruni checkpoint, which has been in operation since 2010. According to Sputnik Ossetia, the people who cross are mostly vendors who bring fruits and vegetables from Georgia in order to sell it in Akhalgori.