10 years after the peace plan

10 years after the peace plan 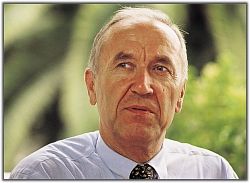 Almost 10 years have passed since the UN, in an attempt to help solve the Abkhaz conflict, launched the Document on “Distribution of Competences between Sukhumi and Tbilisi”. Basically, this was an effort to have the Abkhaz and the Georgian sides to the conflict sit down at the negotiating table and work out modalities for a peaceful settlement. The Document stipulates that this should be accomplished under premises defined in Article 2: “Abkhazia is a sovereign entity, based on the rule of law, within the State of Georgia”.

For a short while a window of opportunity opened up which seemed to allow for conflict settlement between Abkhazia and Georgia on the much-disputed basis of Georgia’s territorial integrity, a position held at that time by all members of the United Nations.

However, in the end the effort failed.

When I came to Georgia as Special Representative of the UN Secretary General and Head of the UNOMIG Mission in November 1999 the key item in my mandate was to broker a solution for the Abkhaz conflict. Personally, I was convinced that such a solution was possible in compliance with the principle of territorial integrity although relations between Abkhaz and Georgians had been deeply traumatized by the 1992/3 war. Positions seemed irreconcilable with the Abkhaz insisting on independence and the Georgians on the return of Abkhazia into the Georgian state. There was zero readiness for compromise as I learnt from first meetings with President Shevardnadse in Tbilisi and the Abkhaz President Arzindba in Sukhumi.

However, in 2001 the overall political climate seemed to become more conducive to a new initiative. Incidents on the cease-fire lines were on the decline, with the exception of the upper Codori valley where units of the Georgian armed forces were introduced in violation of existing agreements. There were also indications of some greater flexibility on behalf of Russia which up to this point had been rather reluctant to back any fresh moves on key aspects of the conflict, particularly the so-called status issue. The terrorist attacks in New York of 11 September gave additional boost to efforts to reset US-Russian relations on a range of hitherto contentious matters, including conflicts in Georgia.

It was obvious that for any successful initiative on the Abkhaz conflict Russia as a key player had to be on board. Since spring 2001 I received signals from high-ranking Russian officials that a new negotiating proposal to the two conflict sides might be of use provided such a proposal was “equally unacceptable to both of them”. Following up on this hint I circulated a draft paper to the representatives of the “Friends of the UN Secretary General” in Tbilisi, i.e. the accredited Ambassadors of France, Germany, Russia, the US and the United Kingdom. After a meeting which I had with the then Permanent Representative of Russia to the UN, Sergey Lavrov, on 31.10.2001 in New York I got the impression that a breakthrough was possible. The “Friends” subsequently gave green light to the submission of the Document to the two conflict sides. President Shevardnadse whom I had kept informed equally signalled agreement.

On 7 December 2001 I was mandated by the UN Secretary General to transmit the Document to the two sides to the conflict with a view to initiating meaningful negotiations.

At first the Abkhaz side was quite surprised by this course of events. It seemed that consultation with Russia on the matter had left to be desired. Sukhumi was facing a delicate choice: how to deal with a negotiating proposal approved by its closest ally? In Sukhumi Prime Minister Yergenia was acting for Ardzinba who had fallen seriously ill. When I saw him mid-January 2002 Yergenia was visibly embarrassed, but refused to receive the Document. His comments implied hidden criticism of Russia. Shortly after our meeting Yergenia went to Moscow. In a press conference after his return he rejected the Document in strong terms, still using language which indicated doubts about the reliability of the Russian partner (“As far as I have been informed…”)

As for Tbilisi I counted on affirmative reactions. But, to my concern, the Georgian political leadership avoided to speak out positively on the Document for some time adopting instead a position of “wait and see”. The support for my initiative turned out to be deplorably weak. President Shevardnadse cancelled a meeting which I was supposed to have with him before my departure into a brief Christmas holiday. To add to my disappointment a press campaign was launched against UNOMIG and me personally on the basis of leaked text excerpts from the Document. Offence was mainly taken at the formulation which defined Abkhazia as a “sovereign entity”. This was interpreted as a plea for independence, and I was accused of high treason with some members of the Georgian Parliament demanding my expulsion.

By that time I had come to realize that the UN were at risk of being drawn into a controversy of domestic Georgian policy. Very obviously assurances had been given to the so-called “Abkhaz Government in Exile”, led by Tamaz Nadeirishvili, that the Document would pass only with their express consent. Valuable time was lost before the Georgian political leadership reconsidered the matter and came out with clear support for the UN initiative.

Meanwhile the Abkhaz had used the chance and realigned powerful allies in Moscow for their cause. Although the next UN Resolution on Abkhazia adopted by the Security Council on 31.1.2002 carried a strong appeal to the Abkhaz side to receive the Document no action followed. At Russian request a clause had been added stipulating that nothing should be “imposed” on the conflict sides. The Abkhaz took this up readily to sidestep any commitment. There was another factor which worked in their favour, namely, an increasingly tense situation in the Codori valley. Unfortunately the Georgian side had missed to undertake steps for a de-escalation during the crucial days when the Document was at stake.

The Document remained high on the agenda before my UN assignment in Georgia came to an end in early June 2002. By then the window of opportunity was closing. The Abkhaz’ resistance against the Document stiffened. During a visit to Moscow in mid-May I urged my Russian counterparts, among them Foreign Minister Ivanov, to take this matter up again with the Abkhaz. The answers were evasive; I was given to understand that priority now belonged to the Codori issue. The following UN Resolutions on Abkhazia until 2006 continued to appeal to the Abkhaz to reconsider their position, but they all remained dead letter.

Repeatedly there have been misinterpretations of the 2001 UN Document: it does not offer ready-made solutions for the conflict, but invites to engage in a negotiating process leading up to such solutions. The UN clearly appears in a mediator’s role whereas the main responsibility for action lies with the Abkhaz and the Georgians as sides to the conflict. In those days neither of them was ready to seize the opportunity, apparently due to a lack of political will and an unwillingness to engage in compromise. The Abkhaz were adamant in their rejection of any solution within the “State of Georgia”; any search for alternatives was equally ruled out. The Georgians ignored that for the Document to be successful a serious cooperative effort on their behalf would have been needed; they were all too self-reliant in the belief that time anyway would work in their favour. Today at least the Georgian side is realizing that an opportunity has been wasted possibly the last opportunity to solve the Abkhaz conflict on the basis of territorial integrity.

Suggestions have been made in our day to re-activate the Document. However, any schematic re-activation appears little realistic. The August 2008 war in Georgia has upset the political coordinates dramatically. With the subsequent recognition of an independent Abkhazia by Russia the very basis on which the 2001 Document rests has been shaken. However, despite Russia’s unilateral act of recognition the Abkhaz conflict can by no means be considered as solved. Along the administrative borders in Georgia a powerful military buildup is under way; the region continues to be infested by instability which may at any time defuse again into tension and even military action. Therefore the challenge still stands unchanged to achieve a negotiated settlement in which all sides to the conflict, including also the principal regional players, participate. Whether the “unfinished” Document of 2001, or a modified version, can again play a role in this context remains to be seen.

(This article’s Georgian version was published in Rezonansi newspaper on October 20, 2011)